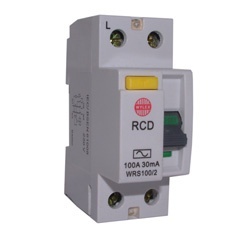 What is an RCD?
A Residual Current Device is a device that measures the current between the live and neutral conductor and disconnects a circuit whenever it detects an imblance. Such an imbalance is sometimes caused by current leakage through the body of a person who is grounded and accidentally touching the energized part of the circuit. A lethal shock could result from such an occurrence. RCDs are designed to disconnect or ‘trip’ very quickly quickly in order to cut the power to that circuit and thus mitigate the harm caused by electric shocks.

When to use an RCD
Din rail mounted RCDs, or RCDs used in consumer units, such as the WRS100/2 protect a number of circuits from earth leakage simultaneously. The new 17th Edition Regulations stipulate that all circuits must be RCD protected. This means that an earth leakage fault on one circuit will result in the disconnecting of another circuit if they are protected by the same RCD.

Critical circuits such as fire alarms, intruder systems or freezers, which should not be tripped by faults on other circuits should be protected by RCBOs.

Features of Wylex RCDS
All Wylex RCDs incorporate a filtering device to provide protection against transient surges in the supply to the unit, thus reducing the occurrence of unwanted tripping

Wylex RCDs must never be used as the sole method of direct contact protection, but are invaluable in providing supplementary protection in high risk environments where damage may occur

The operating dolly may be locked in either the ON or OFF position without affecting the ability of the trip mechanism to operate, i.e. the RCD is ‘trip-free’. It is not possible to hold the contacts closed when a fault condition exists

When in the OFF position a contact gap of 4 mm is present, enabling Wylex RCDs to be used as isolating switches where appropriate